Arisaig’s associations with Clan Ranald go back much further than this 6th clan gathering. In fact, in a chicken and egg way, it would be fair to say that Arisaig, and all the other Garbh Criochan villages and communities pre-date Clan Ranald as such. The clan was only formed from the people who were already there, in common with all other clans.

The concept of clans is much more symbolic nowadays. Clan chiefs have none of the powers they once did. In fact very few of them really hold any clan lands in the way that would have been traditional up till the 18th century. All that changed with the Jacobite Rebellion in 1745. There was a huge turmoil involved thereafter, as the power of the clan system was systematically dismantled by national authorities in the interests of the state hegemony. Today, the clan name is handed down from parent to child in common with any other surname, and the protection of the clan is somewhat unimportant. But humans like community, and this is as good a way to express identity as any other. And it is unarguable that the clan name, as a surname, creates strong links to place and past.

Arisaig is part of Na Garbh Criochan, which is what defines the large part of the old Clan Ranald lands. Elizabeth Mac Donald wrote the following potted history of the clan for our 2005 games programme.

“Ranald Alexander Macdonald is 24th Captain and present Chief of Clanranald, a cadet branch of Clan Donald stretching back to Somerled, c1100.1164, and his wife, Ragnhilda, daughter of the King of Man.

The founder of the Clanranald family was Ranald, gggg grandson of Somerled and son of John of Islay, 1st Lord of the Isles, and Amy MacRuari, heiress to na Garbh Crìochan – Uist, Barra, Eigg, Rum and a part of Lochaber. John later divorced Amy in favour of a more advantageous marriage to Margaret, daughter of Robert the Steward and future King of Scotland.

After her divorce, Amy built Castle Tioram, which later became the clan stronghold. The castle is so named (chirrum – dry) as it is surrounded at high tide, accessible only at low tide. When, much later, Allan, 14th Chief, left for the 1715 Rising, he burned the castle rather than let it be captured by the enemy. He was killed at the Battle of Sherrifmuir. After 1685 Tioram ceased to be the family home and Ormiclate, South Uist, became their place of residence.

Ranald, eldest surviving son of John and Amy’s marriage, should have inherited the Lordship of the Isles, but given his parents divorce, was persuaded to stand aside in favour of John and Margaret’s son, Donald, his half-brother. He was confirmed in his mother’s MacRuari lands becoming 1st of Clanranald in 1372, by charter from his father. He died at Castle Tioram in 1386, was buried at Rollaig Orain on Iona and was succeeded by his eldest son , Allan.

For 455 years the fortunes of the chiefs and their clann (clan), or people, were inextricably linked. Chief and clann fought many battles to defend their remote lands. After the ‘45, when the Highlands were brutally repressed, the old way of life disintegrated, and eventually Arisaig was sold, in 1827, to Lady Ashburton.

For the first time in over 500 years, Arisaig was in the hands of strangers. The plaintive cry, “To whom can I make my complaint and no Clanranald in Moidart?” was a poignant invocation from the days when the chief was father of the clan and had jurisdiction over his lands and people.”

For further information about the fuller history of the clan, Norman H MacDonald’s 2009 book The Clan Ranald of Garmoran is pretty much the definitive source. Norman launched this book at Arisaig Games in 2008, and it is now a very sought after title. 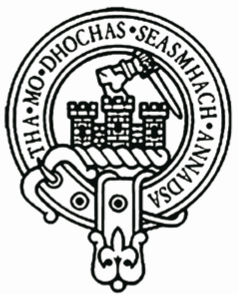 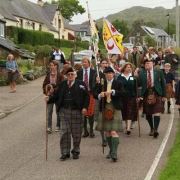 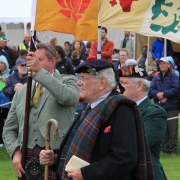 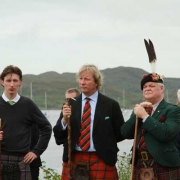